Time flies (when you're having fun)


Where does the time go? I had not found the time to write a post for just over 2 weeks and I had been feeling terribly guilty. Then I remembered why I was blogging (as a diary of my quilting/crafting) and not necessarily for anyone else. It is wonderful that I have friends both in the real and the internet world who take the time to read and occasionally comment on what I have written. Please bear with me if there is a gap in my posts in the future. Life just gets chock a block full with some good things and then again, with some bad. This month has been particularly trying with health issues in my close family which are hard to deal with. However, I have kept busy with projects and support from friends.

I went to a fun UFO day with a local group called Cutting Edge in Ystradowen Village Hall.  There are photos of the day on the link. I had several small projects to finish including a Christmas stocking which needs to be ready for early December for a sewing bee competition. I did a simple quilted front and a saw-tooth star appliqué on the back. The stockings will be donated to the local children's hospital. I plan to trim the top with some white "fur" or gold ribbon when I get the time. 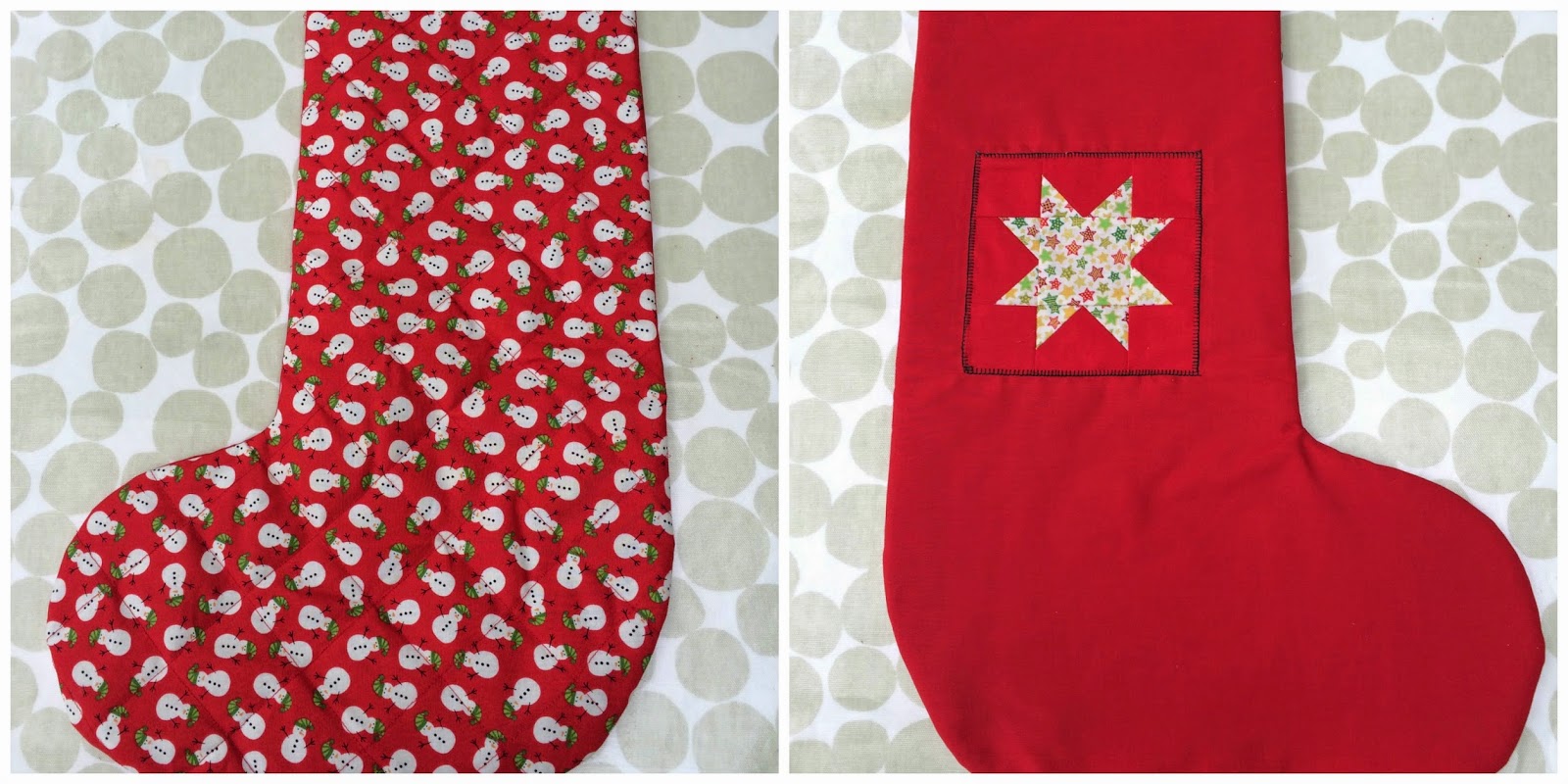 I am trying to keep up to date with the English Flower Garden BOM but I am still avoiding September's block as the background consisted of a set in circle. I'll leave that one until the New Year. Instead I went full steam ahead with October's block- a rose. The pieces have been applied with bondaweb and I machined the raw edges at Ystradowen. I am going to unpick it though as I do not like the spiky stitch I used. Too much talking and not enough thinking going on!
I will probably do a fine blanket stitch by hand but it is still to be finished. 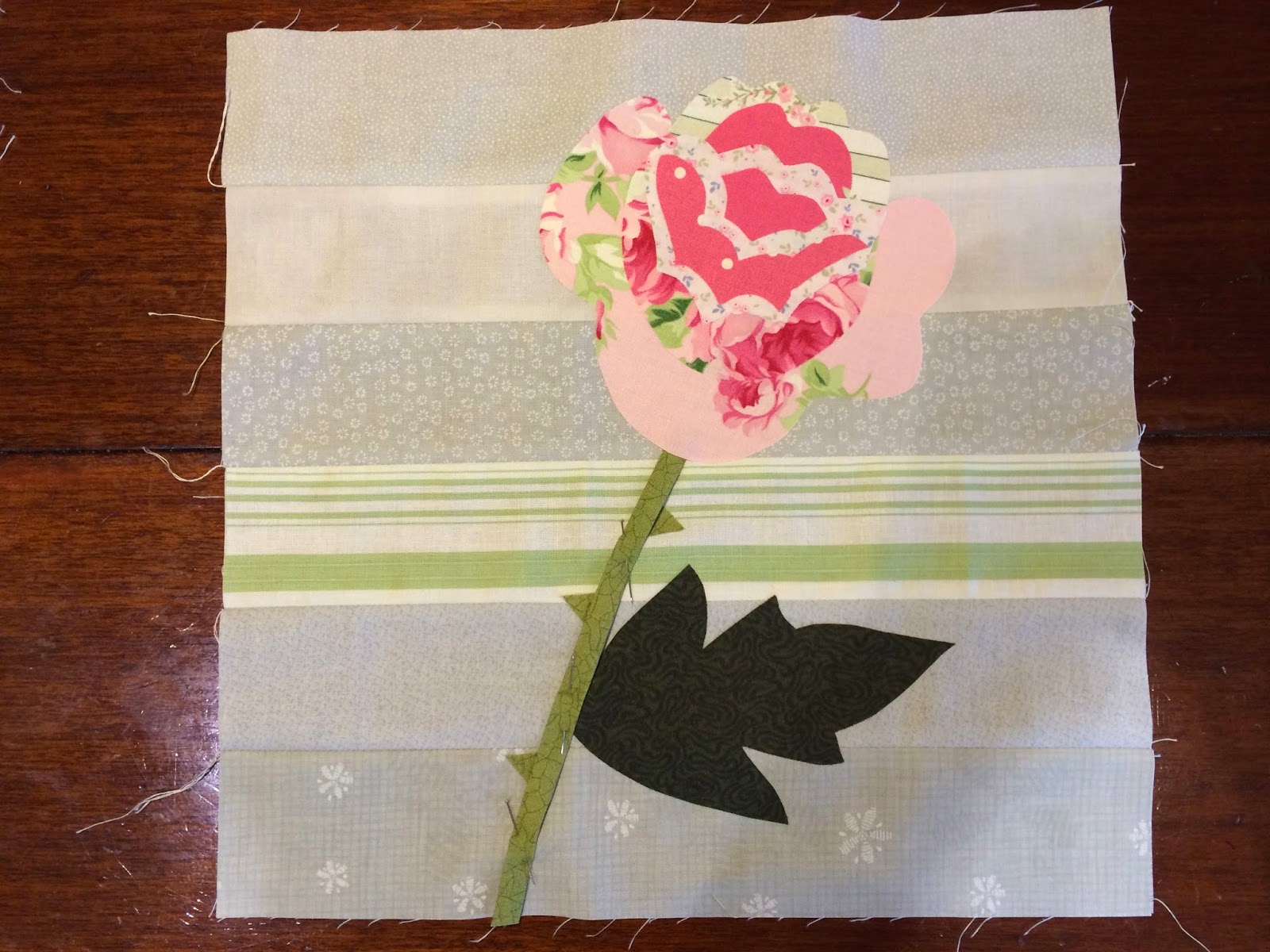 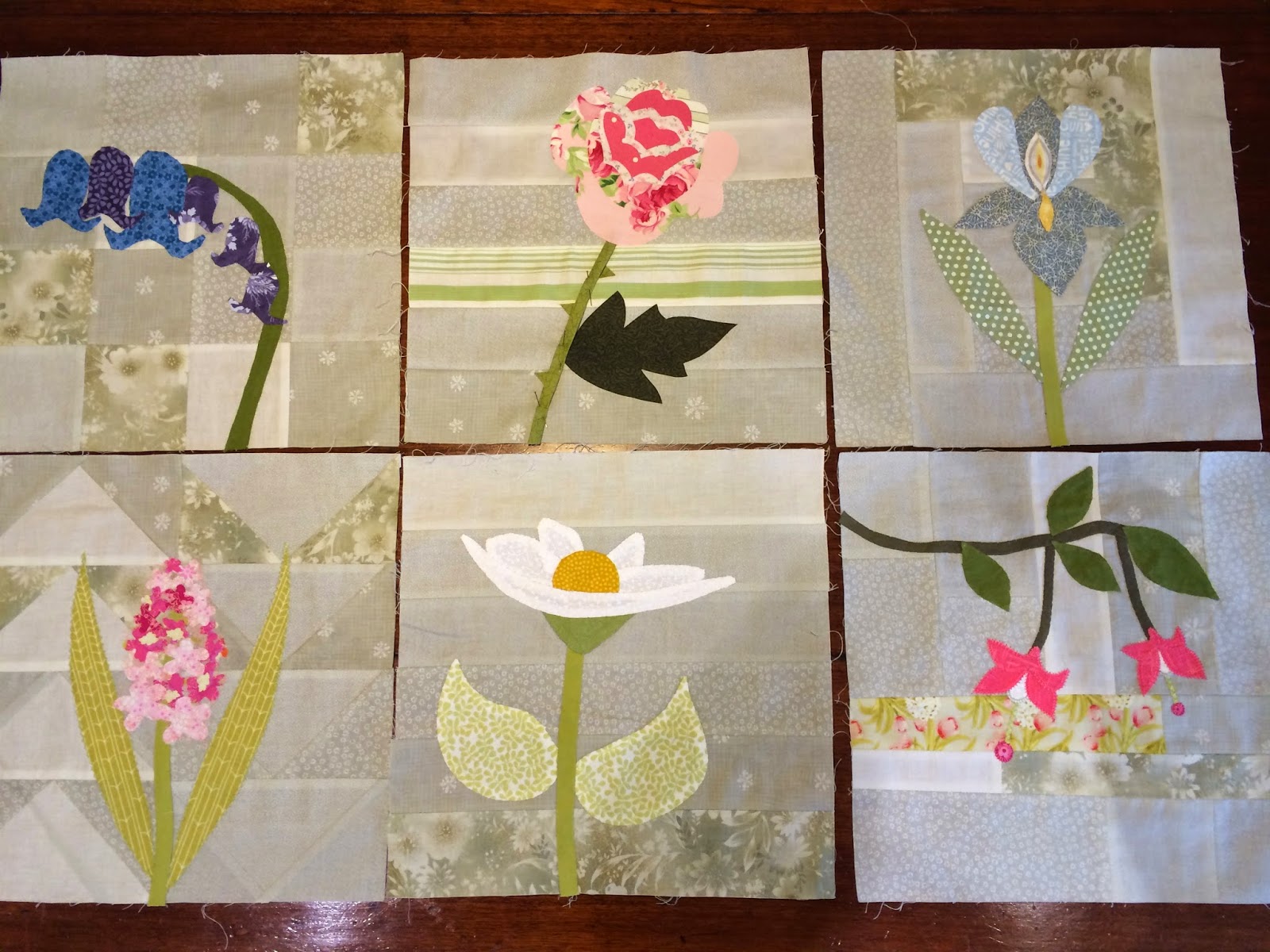 I decided that I would make a Christmas tree quilt for the sitting room as I have had a charm pack of Aspen Frost by Basic Grey for Moda hanging around since last year. The fabric designs appealed as they were traditional but in a more modern colour palette. 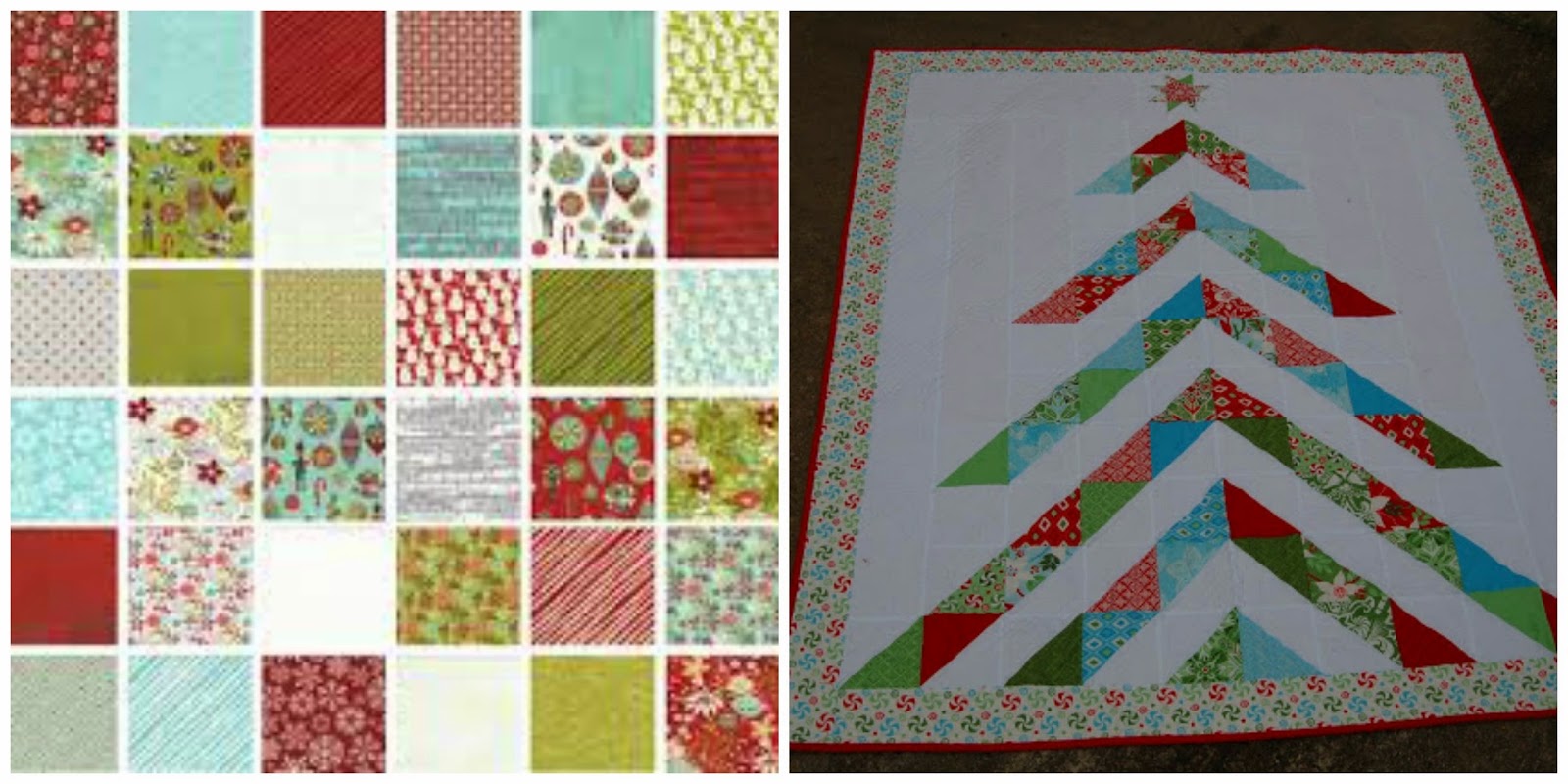 I am teaming the Aspen Frost fabrics with a Kona Bay basic white which has a subtle white on white fleck(not sure what it is as I lost the selvedge). I found the pattern, Oh, Christmas Tree,  on the Moda Bakeshop website. It is simple yet effective and should be good to snuggle up under on the sofa in front of the fire.
The 4.5" HST blocks were made yesterday and trimmed to size. I will be sewing them together this afternoon. 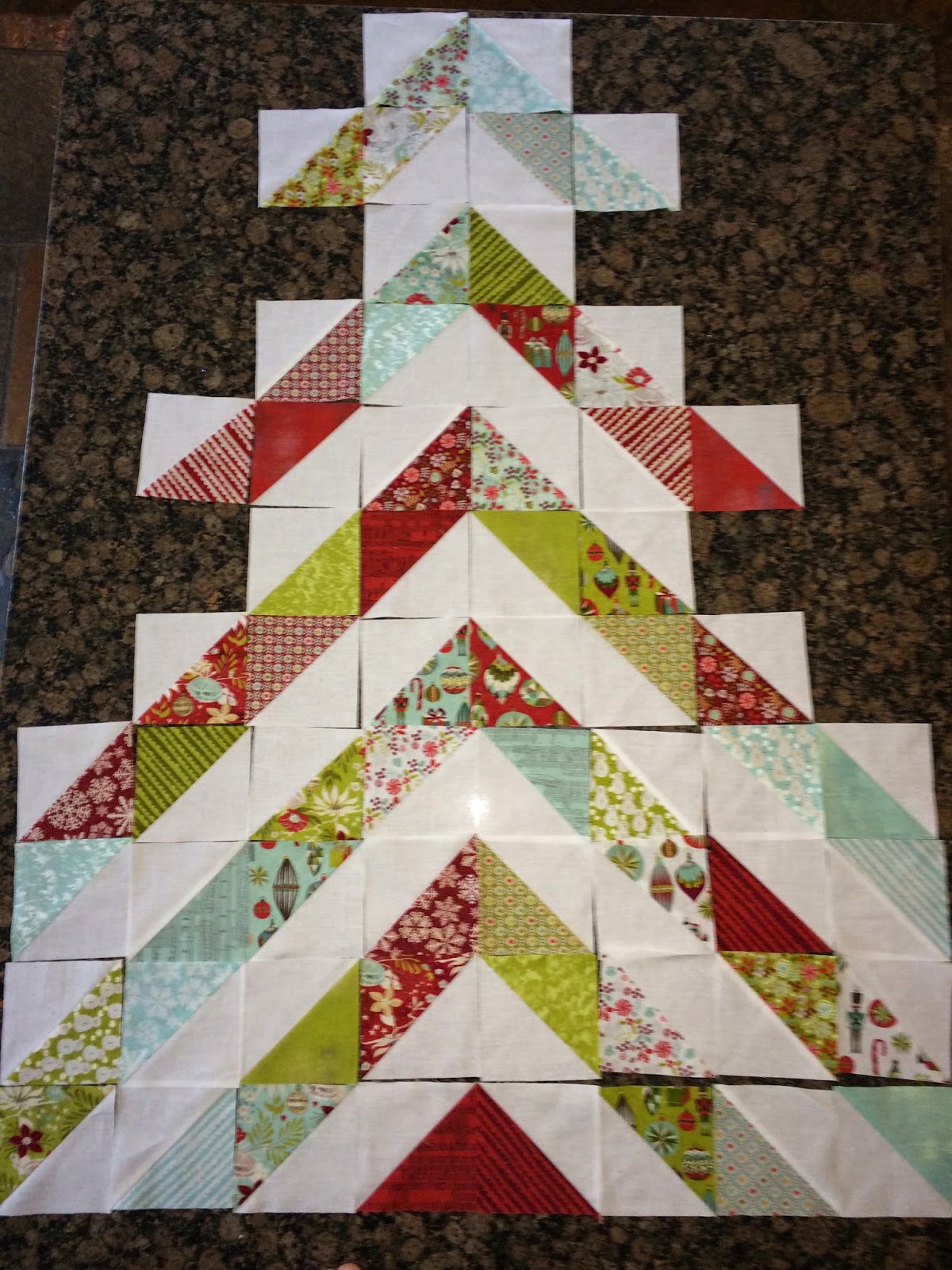 I think this will be a fun quilt for the sofa. I just need to get the backing fabric and wadding now.

It was my birthday yesterday so I had a day off from sewing. Breakfast in bed with my cards and presents, pre-lunch fizz and canapés then a delicious lunch at Pier 64 in Penarth with friends. I am so lucky to have my lovely girl friends. Mike says I am not to get too used to the breakfast in bed!

And finally, I had almost forgotten about the fab giveaway I won when a package arrived from Vicki of A Quilter's Mission. The giveaway was to celebrate her 200th blog post. A pre-birthday surprise full of quilting treats just for me. Vicki had even made me a cute strawberry pincushion. Thank you so much, Vicki. I have followed Vicki's blog for a few months now. She posts regularly (unlike me, lol) and has a ton of fun finished projects and always something on the go. 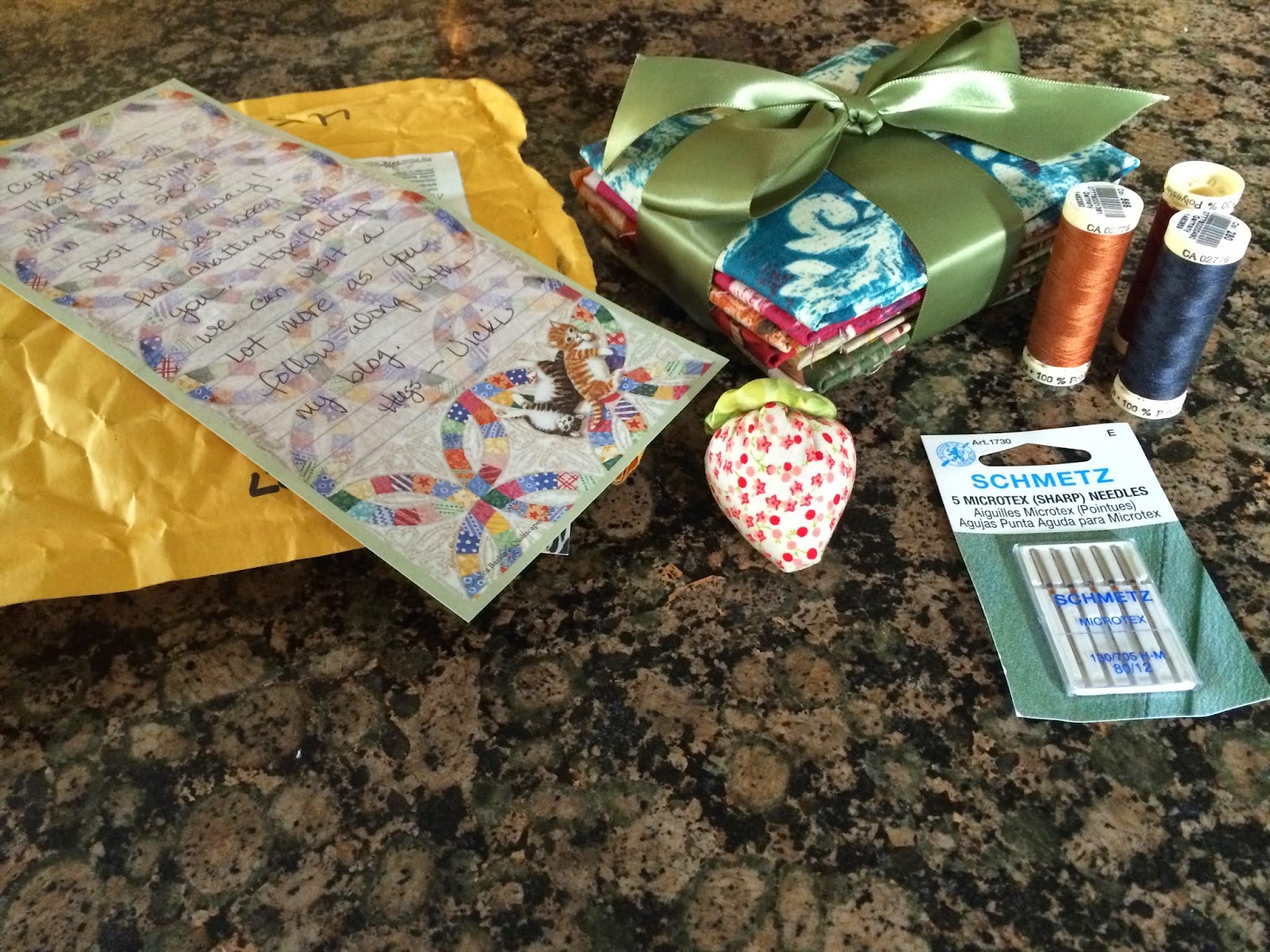 Until the next time,